Warning: Creating default object from empty value in /home/customer/www/manlygearreviews.com/public_html/wp-content/themes/salient/nectar/redux-framework/ReduxCore/inc/class.redux_filesystem.php on line 29
 Why the Kamado Joe is King: Primos vs Kamado Joe 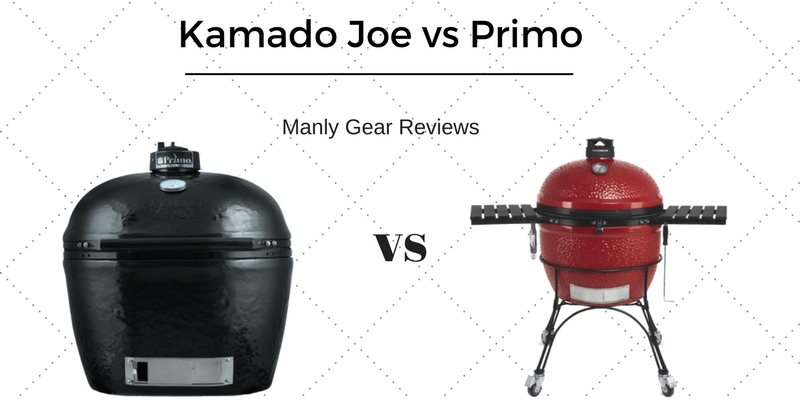 If you are comparing the Kamado Joe and the Primo you are already on the right track in getting one of the best kamado grills for the money. 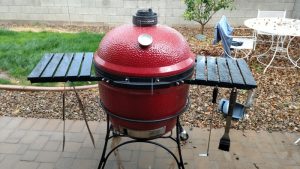 For this comparison I’m going to be focusing on the Kamado Joe “Big Joe” and the Primo XL. In my search for the perfect kamado grill for our family it came down to these two models. The Big Green Egg (BGE) was quickly taken out of the equation because of its cost, lack of included accessories and their reluctance to update the model. Many other options were taken off my list purely because they didn’t offer a big enough grill or in some cases were far too expensive. 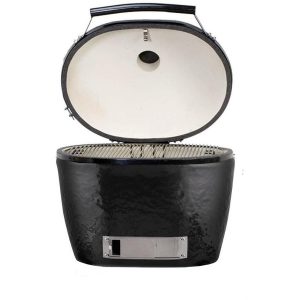 Wait…things aren’t exactly apples to apples between the Kamado Joe and Primo pricing.

So lets address the elephant in the room, the price difference. The entire Kamado Joe line received a 2017 update (except for the Joe Jr.?). This included a new covered top air vent so cooking in the rain isn’t an issue. A stainless steel latch and most importantly a new hinge mechanism. This “air hinge” is an industry first as far as I know. Basically it holds the lid at pretty much any position and limits the possibility of the lid slamming shut. These features, as well as a redesigned firebox, bumped the base price of the Big Joe from $1599 to $1899.

Now that we have that out of the way…

One thing to consider when comparing dollar for dollar. The Kamado Joe line comes with the following accessories over the Primo XL:

So right off the bat you’ll notice the heavy hitter item that is included with the Kamado Joe is the cart. Depending on what cart you buy for your kamado grill you can easily eclipse the price of the grill itself. For some the price difference pays for itself right there. The rest of the included accessories are fairly useful as well except for the firebox divider. There are many reasons I don’t use my fire divider but the bottom line is no matter where the fire is at in a kamado all the food is still subject to the same dome temperature. Because of this I will simply use one heat diffuser plate if I don’t want a particular item getting direct heat.

Cooking area on these units is pretty similar. In base form the Big Joe has a slight advantage in cooking area but if you are using the expander grates the Primo XL has an advantage.

You’ll notice on the Kamado Joe website that the Big Joe is listed as having a maximum cooking space of 1056 sq/in. Like the Primo XL, you need a set of extender racks in addition to your standard racks that came with your grill. You will also need to get an additional set of standard racks to go about 1″ on top of your heat diffusers. You can maybe fit a small brisket or a couple racks of ribs on the bottom rack in that configuration but you also have to keep in mind the possible negative effect of having food that close to the heat diffuser. I only use those mounts when searing (no heat diffuser obviously).

When I first started looking at kamado grills Primo immediately stuck out because they are made in the USA (well that and the fact they are oval). The fact that the Kamado Joe is made in China bothered me initially, especially at the price point they are at. After checking both out in person and having the realization that China actually puts out decent ceramic products (‘fine china’ anyone?) it was no longer a hold up for me. This is obviously personal preference but just know build quality on these two units is very similar.

Kamado Joe vs Primo: The Cook

I do not have a lot of experience cooking with the Primo XL but I can say the Big Joe can easily run 30+ hours at 250 degrees during Arizona’s winter months on a single load of charcoal. Pictures below give you an idea on how big the 24″ grill grate is on the Big Joe. I’ve gown to love the circular layout of the Big Joe, no doubt I could still get a bunch of food on the Primo XL though. Cooking wise both will behave like kamado’s: highly efficient, amazing charcoal flavor and looking dead sexy in the backyard. 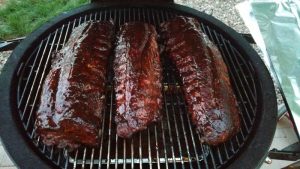 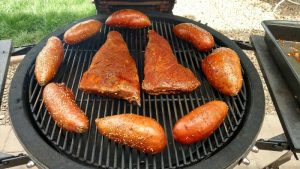 Pictures show 3 racks of baby back ribs on the left and 2  tri-tips with 8 sweet potatoes getting smoked before the tri tips get seared on the Big Joe.

Back in 2015 the Big Joe won for me. I voted with my wallet and have used it 81 times (I’m able to keep track of this by how many boxes of fire starters I’ve gone through). After 81 cooks ranging from quick chicken and burgers to slow smoking massive 20# briskets I think I have a handle on what this thing is capable of.

Would I buy the updated and more expensive 2017 version over the Primo XL? Probably. I believe the new hinge is going to be a huge hit and worth the price increase by itself. The Joe has a more expansive accessory range (not counting the accessories it comes with even) and has a more active community on various forums. Saying all that, we’re creeping towards $2k which puts us in the price category of some of the big boys like the Weber Summit.

Worth noting, both have great warranties to the original purchaser but I will say it seems like Kamado Joe is a bit more responsive than Primo. I’m sure you will hear anecdotal stories going either way on this but from my years of hanging on the forums I’ve concluded Primo is a bit harder to get a hold of. The one time I had to contact Kamado Joe I had an email back the same day.

If $1500+ is just too far outside the budget for a large kamado then I wouldn’t hesitate to go with the Primo XL and go the DIY route on a cart for it. Plan on another $100+ in accessories for the bare essentials. Either way you are going to be able to make some killer food.